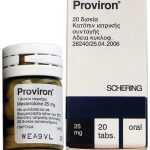 Proviron (Masterolone) is an oral form of 1-methylated DHT (methyl-dihydrotestosterone). This is very strong androgen which is 3-4 times more effective than “normal” testosterone, it possesses no anabolic characteristics and no capabilities of converting to estrogen. One would imagine then that mesterolone would be a perfect drug to enhance strength and achieve some progress. Unfortunately, there is a control mechanism for DHT in the body. When levels get too high it is being converted to an inactive compound. This inactive compound can equally be transformed in the opposite direction to dihydrotestosterone by the same enzyme when low levels of DHT are detected. But this means that very large amounts of this substance are useless to achieve muscle hypertrophy. Very common usage is fighting estrogen just like with Tamoxifen Citrate or Clomiphen.

First of all, proviron serves as anti-estrogen, it prevents  aromatization of other steroids as a process and also partially blocks estrogen receptors. In this instance its action differs from tamoxifen, which only blocks  estrogen receptors. Thus side effects such as gynecomastia and increased water retention are successfully eliminated. Proviron hits the root of the problem, while Tamoxifen fights only symptoms and should be used for longer period until all excessive estrogens are washed out of the body.

The second application is based on expanding the capacity of testosterone. 97-98% of testosterone in the body of a healthy person is inactive and bound to certain proteins. Proviron in this case replaces testosterone, thus more of latter is being released into the blood and helps to build muscle mass. Thirdly, mesterolone is added in pre-competition cycles to increase the rigidity and quality muscle volume. It also decreases water retention in the body, giving the user a visual effect of a dry, high-quality, lean muscles. Proviron is often used not only among bodybuilders, but even the actors and models, who use it to acquire the necessary sportive form before the shooting. Just like the another methylated DHT structure called drostanolone, mesterolone is particularly strong in achieving this effect.

Finally, Proviron is used for recovery of sexual activity during the cycles of steroids such as trenbolone and nandrolone, which decrease libido. Proviron is also commonly prescribed by doctors for people with low levels of testosterone, or patients with chronic impotence.

Mesterolone is preferred by many athletes because it has virtually no side effects on men. In large doses it can cause some virilization symptoms in women. Doses of 25 and 250 mg per day shall be applied without adverse effects. 50 mg per day is usually sufficient to reach goals for any of four applications that we mentioned above. Thus, there is no need to increase the dose.

Male athletes should prefer Proviron to Nolvadex. With Proviron the athlete achieve better muscle hardness, as androgen level is increased and the concentration of estrogen remains low. This is particularly evident when preparing for a competition in conjunction with diet.

However, one should be aware that the loss of strength caused by decreasing of natural testosterone production after the cycle is not cured. Athlete should use other drugs like HCG and clomiphen for it.

Proviron is very effective compound, daily dosage of 50 mg is sufficient although some men do 100 and even 250 mg/day. Athlete normally takes one 25 mg tablet in the morning- and the other one at the evening. In some cases, even one 25mg tablet is enough. Combo of 50 mg Proviron per day and 20 mg of Nolvadex per day results in almost complete suppression of estrogen. However, keep in mind that estrogen is not absolute Evil, it also plays important role in muscle building. Complete suppression of estrogen means lower gains, so one should keep a balance and decrease estrogen level only to the point when it makes no side effects but still produces positive ones.

In the past athletes used it throughout the whole season to make dry and fit outlook all the time, however, we don’t advice such practices nowadays. Clenbuterol / albuterol (ventolin) can do the same but with less side effects.

Proviron is an oral 1-alpha-alkylated substance mostly used as an anti-estrogen drug. Mesterolone may actually contribute to gains. It is taken daily in 50-100 mg doses.

The best stack is certainly with testosterone.  This results in qualitive, lean gains as free testosterone levels are increased and less converted to estrogen.

Of course, proviron is also used in many other stacks, for instance with dianabol (methandrostenolone), boldenone undecanoate and nandrolone in order to reduce estrogen-related activities increase muscle hardness.
Combo of proviron with boldenone makes dead lock for a cutting stack. Sometimes it’s even become possible to add deca into that cutting stack, preferably along with winstrol. It’s good idea to use proviron with nandrolone, because nandrolone temporarily decreases libido.

Side effects with proviron

When athlete do it for more than 10-12 weeks it may slightly increase liver values although in general  proviron is well tolerated by it. Side effects of Proviron for men with a dose of 2 – 3 tablets are very small, so that Proviron, in combination with a steroid cycle can be relatively safe to be taken over several weeks.
DHT can increase blood pressure. High dosages may lead to premature baldness and sexual overstim

ulation, which leads to prolonged erection. Since this state is painful and can cause penis damage, it makes sense to reduce the dose or discontinue its use altogether.

Only 34% of recipients observe minor decrease in endocrine glands function. Proviron did not stop work of HPTA (glands) for noone who took the drug for a year at a dose of 150 mg / day. In general it’s pretty safe and has little impact on the work of HPTA.

There is no effect on the rate LH (luteinizing hormone) and FSH (stimulating hormone) at a dosage of 100-150 mg / day.

Proviron does not substitute Clomid as hormone therapy, but not causing problems, too.
The impact of mesterolone does not produce any changes in the levels of steroids, thyroid hormones, gonadotropins and prolactin.

Female athletes should be cautious while using Proviron, since it does not exclude all possible androgenic side effects. Women are advised not to take more than one 25 mg tablet / day. Higher doses and prolonged use for more than 4 weeks increases the risks of virilization. Female athletes who do not have a problem with Proviron, achieve good results by taking 25 mg of Proviron per day and 20 mg of Nolvadex per day. They say that in combination with a diet it accelerates fat burning and rapid hardening of muscles.

Female athletes who naturally have higher estrogen levels, often add Proviron to steroid cycle, which results in increasing of muscle density. In the past female athletes did proviron whole year in order to look lean, especially before contests and starring. Nowadays, clenbuterol / albuterol do the same work, because they do not cause virilization effects.