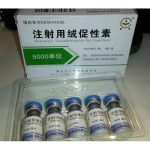 Pregnyl 5000 Iu (Generic HCG) is not an anabolic/androgenic steroid but a natural protein hormone which develops. in the placenta of a pregnant woman. HCG is forme in the placenta immediately after nidation. It has luteinizing characteristics since it is quite similar to the luteinizing hormone LH in the anterior pituitary gland. During the first 6-8 weeks of a pregnancy the formed HCG allows for continued production of estrogens and gestagens in the yellow bodies (corpi luteum). Later on, the placenta itself produces these two hormones.

HCG is manufacture from the urine of pregnant women since it is exerete in unchanged form from the blood via the woman`s urine, passing through the kidneys. The commercially available HCG is sold as a dry substance and can be used both in men and women. In women injectable HCG allows for owlation since it influences the last stages of the development of the ovum, thus stimulating ovulation. It also helps produce estrogens and yellow bodies. The fact that exogenous HCG has characteristics almost identical to those of the luteinizing hormone (LH) which, as mentione, is produce in the hypophysis, makes HCG so very interesting for athletes.

In a man the luteinizing hormone stimulates the Leydig`s cells in the testes; this in turn stimulates production of androgenic hormones (testosterone). For this reason athletes use injectable HCG to increase the testosterone production.

HCG is often use in combination with anabolic/androgenic steroids during or after treatment. As mentioned, oral and injectable steroids cause a negative feedback after a certain level and duration of usage. A signal is sent to the hypothalamohypophysial testicular axis since the steroids give the hypothalamus an incorrect signal. The hypothalamus, in turn, signals the hypophysis to reduce or stop the production of FSH (follicle stimulating hormone) and of LH. Thus, the testosterone production decreases since the testosterone-producing Leydig`s cells in the testes, due to decreased LH, are no longer sufficiently stimulated.

Administering HCG directly after steroid treatment helps to reduce this condition because HCG increases the testosterone production in the testes very quickly and reliably. In the event of testicular atrophy caused by megadoses and very long periods of usage, HCG also helps to quickly bring the testes back to their original condition (size). Since occasional injections of HCG during steroid intake can avoid a testicular atrophy, many athletes use HCG for two to three weeks in the middle of their steroid treatment.

It is often observed that during this time the athlete makes his best progress with respect to gains in both strength and muscle mass. The reasons for this is clear. On the one hand, by taking HCG the athlete`s own testosterone level immediately jumps up. But on the other hand, a large concentration of anabolic substances in the blood is induced by the steroids. Many bodybuilders, powerlifters, and weightlifters report a lower sex drive at the end of a difficult workout cycle. Immediately before or after a competition, and especially toward the end of a steroid treatment.

Athletes who have often taken steroids in the past usually accept this fact since they know that it is a temporary condition. Those, however who are on the juice all year round. Who might suffer psychological consequences or who would perhaps risk. The breakup of a relationship because of this should consider this drawback when taking HCG in regular intervals.

A reduce libido and spermatogenesis due to steroids in most cases, can be successfully cure by treatment with HCG.

Athlete should iniect one HCG ampule (5000 I.U.) every 5 days. Since the testosterone level, as explained, remains considerably elevated for several days. It is unnecessary to inject HCG more than once every 5 days. The relative dose is at the discretion of the athlete. But it can be determine base on the duration of his previous steroid intake and on the strength of the various steroid compounds. Athletes who take steroids for more than three months and athletes who use primarily the highly androgenic steroids such as Anadrol, Sustanon , Cypionate, Dianabol (D-bol), etc. should take a relatively high dosage.

The effective dosage for athletes is usually 2000-5000 I.U. per injection and should-as already mentione be injecte every 5 days. HCG need to use for a 4 weeks maximum. If HCG is take by male athletes over many weeks and in high dosages. It is possible that the testes will respond poorly to a later HCG intake and a release of the body`s own LH. This could result in a permanent inadequate gonadal function.

Cycles on the HCG need to  keep down to around 3 weeks. At a time with an off cycle of at least a month in between. For example, one might use the HCG for 2 or 3 weeks in the middle of a cycle, and for 2 or 3 weeks at the end of a cycle. It is speculate that the prolonge use of HCG could permanently, repress the body`s own production of gonadotropins. This is why short cycles are the best way to go.

Side effects of HCG:

HCG can in part cause side effects similar to those of injectable testosterone. A higher testosterone production also goes hand in hand with an elevated estrogen level which could result in gynecomastia. This could manifest itself in a temporary growth of breasts or reinforce already existing breast growth in men. Farsighted athletes thus combine HCG with an antiestrogen. Male athletes also report more frequent erections and an inereased sexual desire. In high doses it can cause acne vulgaris and the storing of minerals and water. . Which is possible through the use of HCG could give the muscle system a puffy and watery appearance.

Each package, for each HCG ampule, includes another ampule with an injection solution containing isotonic sodium chloride. This liquid, after both ampules was open in a sterile manner, is injecte into the HCG ampule and mixed with the dried substance. The solution is then ready for use and need to inject intramuscularly. If only part of the substance need to inject the residual solution should be store in the refrigerator.