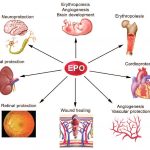 EPO (erythropoietin) is a naturally occurring protein hormone. EPO is produced in the body by the kidneys and is used to regulate red blood cell production.  Patients suffering from anemia or chronic renal failure are legally allowed to use this form medically, it is proven that this product effectively stimulates and maintains erythropoiesis in a large percentage of patients treated. The efficiency of this drug quickly made it a ready replacement for older and less effective therapies such as Anadrol (oxymetholone) 50 or Nandrolone Decanoate. The biological activity or rHuEPO is indistinguishable from that of human erythropoietin. Some athletes have decided to take advantage of this substance as well.

EPO has put a whole new spin on blood doping. No need for messy transfusions, just shoot up with EPO to increase your circulating erythrocyte mass.

EPO is actually not that dangerous a product to use if it is used PROPERLY, and one`s blood is monitored. With proper blood work, and boosting to a safe level (typically max of 53-54% for elite level endurance athlete, while it`s around 40% for “normal” people) there shouldn`t be major complications. But do not cross that line.

Endurance athletes are highly attracted to EPO for the effect it has on red blood cell production. It is no secret that the practice of “blood doping” is popular with endurance sports. This procedure involves removing and storing a quantity of blood from your body, to be later replaced. By adding this stored blood before an event (by then the body has restored the lost blood volume), the athlete has a much greater number of red blood cells.

Weekly dosage varies 50-300 IU per kilogram of body weight. By this guideline a 176 lb (80 kgs) athlete would take a maximum of 4000 U per injection. This would be done in the days/weeks prior to a competition, the peak effect hopefully reached near the day of the event. Sportsmen starts feeling results after two weeks of usage (hematocrit level increases 3-4%). Most of specialists agree that one should not use erythropoietin for more than six weeks!

Also one can use this formula: 20-30 IU per kg for every shot (three shots a week). Conservative approach is 4500 IU / week (3 shots x 1500 IU) with 3000 IU supportive dosage (3 shots x 1000 IU).The higher dosage is – the more effect and more risks you gain. Anyway, it depends on the personal characteristics, base levels, target goals desired. Blood tests recommended if you`re toying with higher doses.

Take one tab of aspirin two times a day

After meal or along with milk to prevent stomach damages (milk neutralizes aspirin acids). Aspirin will decrease blood viscosity thus decreasing risks of thrombosis which could be fatal during the long race due to sweating and extreme dehydration.

EPO is sold in recombinant form (rhEPO) for injection. It usually is packaged as a lyophilized (freeze dried) powder that is reconstituted with sterile water before injection. Injections preferably to be made by thin needle with insulin syringes. Erythropoietin is to be given subcutaneously (between the skin and muscle – into the body fat) or intravenously. These two paths of administration have greatly different effects on the blood level of the drug. When given as an IV injection, peak blood levels of the drug are reached very quickly. The half-life is also short, approximately 4 or 5 hours long. When administered “SubQ”, the drug will take 12 to 18 hours to reach a peak level.

SubQ injections are to be made in the outer upper arms, front of thighs, or abdomen. If you are injecting in the abdomen, just be sure to not be too close to the umbilicus. If you`re doing some anticoagulant as well, you could still give EPO in the abdo, just not in the same site. EPO injections often burns because you inject it cold. If you can roll it between your hands a couple of minutes or let it get to room temperature, it is painless as an insulin injection.

Be extremely careful if you are going to use Erythropoietin (EPO) along with anabolic steroids. This can be a dangerous chem to mess with, especially with erythropoetesis-stimulating drugs like Anadrol.

Some endurance athletes may use both, EPO and winstrol during preparation for the contest, however, we have no information on the possible synergetic effects, and, most important, side effects. If anyone emails us his own winstrol + Erythropoietin (EPO) experience – this would be appreciated.

With high dosages anticoagulant therapy such as Lovenox is indicated to help reducing the risk of developing DVT, or deep vein thrombosis. For regular dosages aspirin is enough.

Until recently, accurate testing has been difficult because the recombinant human EPO made in the lab is virtually identical to the naturally occurring form. There are no firmly established normal ranges for EPO in the body. The only previously available route to curtail cheating for sports governing bodies was to ban an athlete if the hematocrit level was too high (e.g., above 50%). Thus, in the past many athletes chose to cheat because. As long as they kept their hematocrit levels below 50%, there seemed little risk of getting caught. Of course, the other way to get caught was highlighted in the disastrous 1998 Tour de France. Several team doctors and personnel from several teams were caught red-handed with thousands of doses of EPO and other banned substances. Ultimately about 50% of the teams withdrew from the race – either for cheating or in protest

Risks and side effects with EPO

Just like with steroids – you should use it wisely. Inappropriate usage might be dangerous if not fatal, but proper one eliminates all the risks or decreases it to the affordable level. Nowadays, we gained enough experience and stats to know how to avoid the problems.

The reason that EPO, and transfusion blood doping, might be dangerous is because of increased blood viscosity. Basically, whole blood consists of red blood cells and plasma (water, proteins, etc.). The percentage of whole blood that is occupied by the red blood cells is referred to as, the hematocrit. A low hematocrit means dilute (thin) blood, and a high hematocrit mean concentrated (thick) blood. Above a certain hematocrit level whole blood can sludge and clog capillaries. If this happens in the brain it results in a stroke. In the heart, a heart attack. Unfortunately, this has happened to several elite athletes who have used EPO in 80es.

Be the first to review “EPO- Erythropoietin” Cancel reply